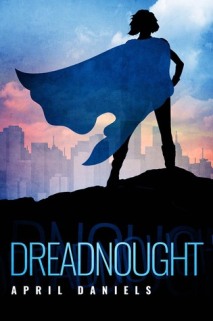 Danny Tozer has a problem: she just inherited the powers of the world’s greatest superhero. Until Dreadnought fell out of the sky and died right in front of her, she was trying to keep people from finding out she’s transgender. But then her second-hand superpowers transformed her body into what she’s always thought it should be. Now there’s no hiding that she’s a girl.

It should be the happiest time of her life, but between her father’s dangerous obsession with curing her girlhood, her best friend suddenly acting like he’s entitled to date her, and the classmate who is secretly a masked vigilante, Danny’s first weeks living in a body that fits her are more difficult and complicated than she could have imagined.

She doesn’t have much time to adjust. Dreadnought’s murderer, a cyborg named Utopia, still haunts the streets of New Port City. If Danny can’t sort through the confusion of coming out, master her powers, and stop Utopia in time, humanity faces extinction.

Omg guys, this book. I have no idea how to explain how good this book is, but I’ll try.

Before I start, I should mention the book includes transphobia, homophobia, and physical abuse.

I knew I would like this book because who doesn’t want to read about a trans superhero?What I never realized though, that Danny would become my smol child. I love Danny so much and I need more of her now.

The worldbuilding is sort of confusing, but I think I figured it out. Cape is another word for hero and there are 3 types, white, grey, and black. White capes are purely good, grey capes do what they need to to keep people safe, and black capes are villains. Metahumans, like in the DC universe, are powered people.

The beginning and the final fight scene were sort of confusing too, but overall the book was amazing. Everything felt like a really good fanfic and I can’t wait to read the next book.