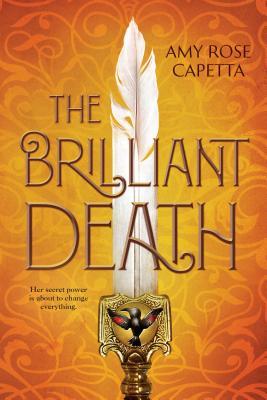 All her life, Teodora has hidden the fact that she secretly turns her family’s enemies into music boxes, mirrors, and other decorative objects. After all, everyone inVinalia knows that stregas–wielders of magic–are figures

out of fairytales. Nobody believes they’re real.

Then the Capo, the land’s new ruler, sends poisoned letters to the heads of the Five Families that have long controlled Vinalia. Four lie dead and Teo’s beloved father is gravely ill. To save him, Teo must travel to the capital as a DiSangro son–not merely disguised as a boy, but transformed into one.

Enter Cielo, a strega who can switch back and forth between male and female as effortlessly as turning a page in a book. Teo and Cielo journey together to the capital, and Teo struggles to master her powers and to keep her growing feelings for Cielo locked in her heart. As she falls in love with witty, irascible Cielo, Teo realizes how much of life she’s missed by hiding her true nature. But she can’t forget her mission, and the closer they get to the palace, the more sinister secrets they uncover about what’s really going on in their beloved country–and the more determined Teo becomes to save her family at any cost.

This post is also for school so it’s much more formal. I think. I picked this book up knowing that fantasy tends to confuse me. I only really read it because the MC is genderfluid. Now that I’m done, it is honestly one of my all time faves. Capetta’s writing was hypnotizing. I think I’ve been in a slump lately because both school and depression take up all my time and spoons. This book cleared my skin and watered my crops. I can’t tell you the last time I was so in love with a book that I literally couldn’t put it down. I started yesterday right before school. I read through half of Latin (H was talking about philosophy and idc about that tbh) and all of my free period and lunch and through gym (sorry, PE). I even cried at one point. I had no idea how much I needed Teo and Cielo’s story. Both of them are stregas (basically Italian witches) and genderfluid and honestly so pure. I would die for both of them. Both of their fluidity felt so natural and well researched. Teo is magical and royal and badass and I love them. Cielo had a troubled past but an amazing future. Their romance didn’t feel forced at all. I loved how the author didn’t give either the MC or LI dysphoria, a rare occurrence in YA lit and honestly media as a whole. Both Teo and Cielo were extremely relatable. I felt seen. I need the sequel ASAP. I also need Once and Future, though. Pitched as queer King Arthur, its a collab beween Amy and her spouse Cori McCarthy. For the record the two are super cute together and I stan them so much.